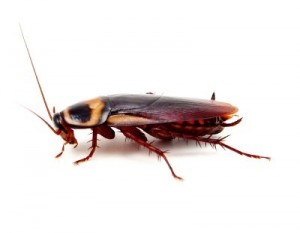 Behavior – Like all cockroaches, it is omnivorous and will eat virtually anything.

Habitat – This cockroach thrives in warm, damp environments such as sewers, steam tunnels, basements, crawl spaces, and boiler rooms. In southern states, it will also be found living and breeding outdoors.

Tips for Control – The key to control is to find and treat these sources directly. In many cases, the services of a professional company are required to achieve long term relief. In southern states where this cockroach lives outdoors, successful control involves treating the attic, crawl space, and exterior cracks in the home. Finding and treating any type of cockroach harbors over the entire property. 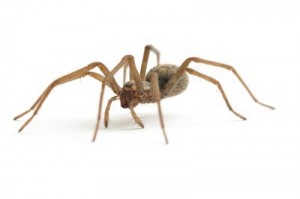 Size – May measure up to 1- inch in length with a leg span up to 2 inches.

Color – Brownish gray with a number of various markings. The domestic house spider is closely related to the hobo spider and is difficult to distinguish from that species.

Behavior – Domestic house spiders are funnel-web spiders, meaning they construct flat webs which have a funnel shaped retreat at one end. The females spend most of their lives in the webs, while the males and immature spiders may wander about in search of females or better nesting sites. It is usually these males or young spiders that are seen by homeowners. Unlike the hobo spider, which resembles this spider, the domestic house spider does not have a dangerous bite.

Habitat – The domestic house spider is found from central and northern California up through the Pacific Northwest in Washington, Idaho, and Oregon. This species prefers to build its webs where a hole or crack exists in which it can locate its funnel retreat. Such webs are usually found in basements, crawl spaces, garages and outdoors in vegetation.

Tips for Control – The key for controlling the domestic house spider is to look for webs and remove them, making sure a treatment is applied into any crack associated with a web to be sure the spider has been killed. Steps that should be taken to prevent new spiders from entering include:

Carpenter Ants are in the family Formicidae. Members of this family, less than 1/16-1″ (1-15 mm) long, are mostly black, brown, or reddish.

Ants have a slender “waist,” or pedicel, of 1 or 2 bead-like or scale-like segments between the thorax and abdomen. They differ from wasps in having distinctly elbowed antennae. Ants live in colonies in underground tunnels or in galleries in dead wood.

From time to time, winged males and females emerge from the nest and perform a brief mating flight. After mating, the males die, and the females lose their wings and return to the ground to start a new colony. Workers gather food, maintain and defend the nest, and tend eggs, larvae, and pupae.

Most species are predators or scavengers, but a few harvest seeds, visit clusters of aphids to eat their sweet secretions, raise fungus for food in small underground gardens, or eat leaves cut from plants. Some species produce eggs, which are eaten by the queen and workers.

When disturbed, most ants are capable of “biting” or “stinging” people. Warning:  These ants will bite if aggravated. 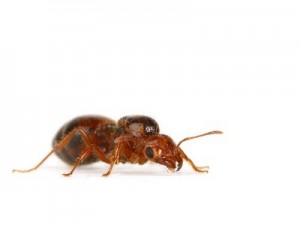 Description – A Worker sized fire ant is typically 1/16-1/4″ (1-6 mm).  There can be two or more worker castes of different sizes with a dull yellow, red, or black color. The fire ants head tends to be large with jaws incurved and lacking teeth.

Fire ants have a 2-segmented body including the “waist” (pedicel) between thorax and abdomen. Fine hair is mostly on their head and abdomen. Warning: Stings from Fire Ants produce a painful, burning sensation.

Habitat – Fields, woodlands, open areas, and in dry to moist soil. Their habitat environments range Florida and Gulf states to Pacific Coast, north to British Columbia. Discussion reports of devastating battalions of fire ants are well known in the South and Southwest as well.

Although these ants often damage young plants, they rarely destroy established crops. Some people even consider this species a beneficial predator of insect pests. Other members of this common genus are found throughout North America but the range of individual species is more restricted.