The “Curse” Of King Tut Is Really A Mosquito Bite 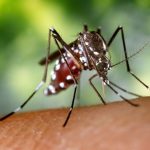 There exists many urban legends concerning Egyption mummies. Any rationally thinking person would never lend credence to legends about supernatural mummy curses. The most famous urban legend of this sort concerns the momentous occasion in which King Tut was unearthed by British researchers. Some of you may know that a few researchers who were involved with this discovery died “mysteriously.” The death of the expedition’s financial backer, George Herbert, or Lord Carnarvon, as he is more famously known, is the most notable death; and it was this death that prompted rumors of “the mummy’s curse.” However, researchers believe that Lord Carnarvon succumbed to complications arising from a mosquito bite, and not so much from a “curse.”

The British archeologist, Howard Carter, discovered King Tut’s tomb in the Valley of the Kings near the Nile River in 1922. This discovery quickly became a media sensation, which surely helped to fuel the later rumors about the alleged curse. Carter never would have discovered the tomb had it not been for his financial backer, Lord Carnarvon. Carnarvon died in 1923 from unknown causes. Since Carnarvon’s death occurred only a couple of months after the tomb was discovered, people attributed his mysterious death to a curse issued by King Tut. Although this explanation may seem sensible to some people, experts believe that Lord Carnarvon died from blood poisoning that progressed to pneumonia. The blood poisoning was likely caused by a mosquito bite that had been infected with erysipelas, which is a type of skin infection that is similar to cellulitis. This infection occurs when strep bacteria breaches the skin’s protective surface, and sometimes an abscess can form as a result. The legs and face are the body areas that are most vulnerable to erysipelas infection, and Lord Carnarvon was bit on his face. Insect bites can cause erysipelas, especially if bites become irritated further. This was probably the case with Lord Carnarvon, as it was reported that he had irritated his mosquito bite by shaving over the wound. This explanation is certainly more believable than a mummy’s curse, but at least Lord Carnarvon’s public misdiagnosis cemented mummy’s into pop culture history.

Have you ever heard of an insect bite leading to a skin infection?