Most animals compete for resources, making only the most fit members of a particular species ripe for survival. An animal’s behavior is the product of millions of years of competition. It could be said that evolution, at least in part, is driven by competition between animals. As much as competition seems to be an inherent aspect of all of nature’s organisms, it is surprising that cooperative behaviors even exist at all. Amazingly, there are a few animals that are largely cooperative as opposed to competitive. For example, social insect behavior is largely cooperative, and the survival of social insect colonies trumps the survival of individual social insects. Insects like ants, bees, termites and many wasps have evolved under cooperative social circumstances. This is precisely why social insect behavior is so puzzling to evolutionary biologists; after all, how could a species survive or evolve without resorting to competitive behaviors? And how did cooperative behaviors evolve in a world inhabited by competitive animals? In an effort to answer this question, researchers have recently conducted an experiment on ants, and the results were quite telling. 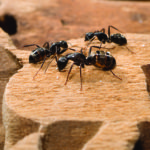 Labor in social insect colonies is divided in order to efficiently meet a colony’s goals. In order to understand how social insect behavior evolved, researchers have investigated the clonal raider ant of Asia. These ants form colonies that don’t include queens. In fact, their colonies consist of nothing but workers, as each ant lays eggs that are a clone of themselves. Since these colonies contain nothing but workers, they can stand in as representatives of early ant species. Therefore, these ants may be able to provide scientists with information concerning the early evolution of divided labor among social insects. The researchers found that colonies containing as few as six ants began to demonstrate cooperative behavior by forming divisions of labor. It was found that some ants preferred some tasks over others, so even ants can be it bit choosy. However, as the colonies grew to contain more members, colony wide tasks became more specialized. Furthermore, large colonies led to more stable conditions within nests, and the health of each member improved when considering reproductive rates and mortality. Given these observations, the researchers believe that cooperative animals may evolve more readily than competing animals, as cooperative animals ensure that each member of a colony are well cared for. When viewed in this light, cooperation is more evolutionarily advantageous than competition.

Do you believe that humans would be better off as cooperative animals, like ants or termites, as opposed to remaining competitive animals?