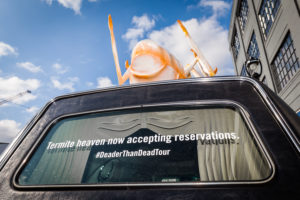 Natchitoches, LA. ─ February 26, 2019 ─ While a 7-foot termite strapped to the roof of a hearse may seem fearsome, those who have dealt with the dangers of actual termites up close know the real threat is much larger. Millions of homeowners risk losing billions of dollars in property damage this year. Some will lose their homes altogether. Against this unseen termite threat, the best defense is awareness.

Beginning March 11 during National Pest Management Association’s (NPMA) Termite Awareness Week, the Sentricon® System Deader Than Dead Tour will travel across the country for the second year in a row, crossing 22 states to alert homeowners on how they can stop termites dead in their tracks. NPMA estimates termite damage costs U.S. homeowners $5 billion each year, so the Deader Than Dead Tour team is hitting the road to show homeowners how to best protect themselves from harm.

The six-week Sentricon® System Deader Than Dead Tour will educate homeowners on the importance of preventative termite control and the value the Sentricon® system provides. Featuring the “Coroner’s Caddy” — a 17-foot hearse outfitted with a 7-foot dead termite replica on its roof — the tour will visit 11 cities during peak termite swarm season.

Please join J&J Exterminating in Natchitoches on Wednesday, March 20, 2019 as a Select City Host of the Sentricon System Deader Than Dead Tour!

What:  J&J vehicles, along with a Natchitoches City Police escort, will be winding their way approximately 2 miles to the Downtown Riverbank to join local dignitaries for a brief “Meet and Greet” educational session and photo opportunities.  J&J will also be grilling and selling hamburgers at the Riverbank with donations going to the “Relay for Life” organization.

Other stops for the Deader Than Dead Tour include:

The Sentricon® system: a clear solution to the hidden problem

Termites are an unseen problem, and damage is rarely covered by homeowners insurance. More than 4 million homes across the United States have been protected by the Sentricon® system, but tens of millions are vulnerable to attack. The best solution for termites is proactive protection and awareness. Homeowners can avoid damage by having an annual inspection done by a professional and preventative termite protection in place.

Using scientific knowledge of termite behavior, the Sentricon system provides complete termite protection by eliminating the entire termite colony, including the termite queen. It was designed and developed to stop termites from being able to eat, reproduce or survive. No other product has been as thoroughly proven effective as the Sentricon system, which means it keeps termites out of homes and gives homeowners peace of mind.

To be sure you aren’t the victim of termite damage, schedule an inspection with your local pest management company. You can start by finding your local Certified Sentricon Specialist™.

Corteva Agriscience™, Agriculture Division of DowDuPont (NYSE: DWDP), is intended to become an independent, publicly traded company when the previously announced spinoff is complete by June 2019. The division combines the strengths of DuPont Pioneer, DuPont Crop Protection and Dow AgroSciences. Corteva Agriscience provides growers around the world with the most complete portfolio in the industry — including some of the most recognized brands in agriculture: Pioneer®, Encirca®, the newly launched Brevant™ seeds, as well as award-winning Crop Protection products — while bringing new products to market through our solid pipeline of active chemistry and technologies. More information can be found at www.corteva.com. Follow Corteva Agriscience on Facebook, Instagram, LinkedIn, Twitter and YouTube. Follow Range & Pasture at Corteva Agriscience on Twitter.

™®Trademarks of Dow AgroSciences, DuPont or Pioneer, and their affiliated companies or their respective owners.  Always read and follow label directions.