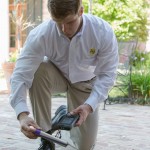 Many towns in Italy contain structures that are connected. For example, a restaurant and an apartment building may share the same walls and foundation. This means that termites can wind up infesting several interconnected buildings along a city block. Tenting fumigations are impossible in this case, as one single building cannot be isolated for termite treatments. In addition to this complication, many of these antiquated structures are not ventilated well, as the original architects failed to take air circulation into account before construction. This lack of ventilation makes for hot and moist conditions that are hospitable to termites. Furthermore, many wood-constructed ground floors make contact with soil, making termite infestations all but inevitable in these centuries old buildings. Due to these structural peculiarities, the world’s leading pest control researchers considered preventative termite treatments to be next to impossible in Italy. However, during the mid 1990s, American researchers saved many historical structures in Italy by developing a new subterranean termite control method.

Subterranean termites are hard to detect, as these insects both nest and forage beneath the soil’s surface. Subterranean termites become noticeable only when swarming, or when a thorough inspection is carried out. The presence of mud tubes is also a dead giveaway, but once these signs are noticed, it is usually too late to prevent serious damage to infested structures.

Initially, pest control professionals considered applying chemical barriers beneath the ground around valued structures. However, this proved unfeasible, as the many interconnected structures in the country covered too large of an area. Eventually, pest control professionals experimented with a bait-system that had shown promise as a termite control method in America.

This method consisted of setting up a bait station below the ground. Termites visiting this bait station would expose themselves to a particular chemical that kills termites once they molt. Ideally, upon returning to their colonies, these poisoned termites would end up exposing the rest of their colony members to the poison. Eventually, this slow acting poison would kill an entire colony. Italian officials were pleased with the results of this method, as the bait system eliminated termite activity in several locations in a period of only three to twelve months.

Do you think that similar bait systems should be provided to impoverished countries that have difficulty financing infrastructure maintenance?