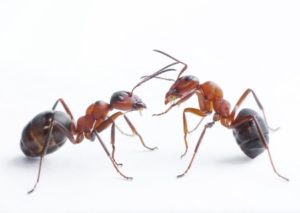 When it comes to warfare, no animal is as inventive and violent as the human being, right? Well, that would seem to be the case, but ants also make great warriors. Just like humans, ants are known to resort to excessively aggressive warfare tactics that include mass killings, looting enemy homes, chemical warfare, and even killing women and children. Any animal species with a large population has the resources to launch large-scale attacks. According to the ecologist and photojournalist Mark Moffett, humans and ants show many similarities in their fighting tactics. In fact, when it comes to waging war, humans are more similar to ants than they are other primates. Moffett has spent years tracking different ant species in order to observe and record their styles of warfare, and most people would not believe the brutal acts of which ants are capable.

Moffett has found certain ants marching in formations that resemble Roman military formations. Not all ants behave this way, but army ants are an exception. One hundred and thirty different species of army ants have been found within the Americas. When attacking another insect colony, these ants will march in groups of enormous numbers. The opposing insects being invaded are always surprised and taken off-guard by these massive legions of army ants. Needless to say, the army ants normally win the ensuing battle, but sometimes with heavy losses.

Some ants can even make use of deception in order to fool their enemies into losing a battle. For example, two ants will sometimes fight head to head. In these cases, the taller ant almost always wins over the shorter ant. However, shorter ants have been seen standing atop small pebbles, similar to humans sitting atop horses, unbeknown to the taller ant. This method, although seemingly simple, can often save the shorter ant’s life.

Have you ever witnessed a fight between two warring ant colonies?