How Did Argentine Ants Invade The United States?

How Did Argentine Ants Invade The United States? 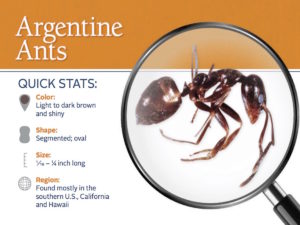 Ants may all look alike to you, but if you look at the area around your feet more closely, then you may notice that ants are more diverse than you think they are. Many of the ants you see, even the most abundant ants, may not even be natural “Americans”, so to speak. For example, the Argentine ant, managed to find its way to America from, you guessed it, Argentina. This ant is the most numerous of all ant-types within the entire state of California. Despite this, experts say that the Argentine ant arrived within America only as far back as 1916.

German entomologist, Dr. Gustave L. Mayer, first documented the existence of this ant in 1866 in Buenos Aires. Since then, every continent in the world has become home to Argentine ants, except, of course, for Antarctica. Do to this rapid migration, it goes without saying that these particular ants are well adapted to survival, no matter the environment in which they are exposed. This success is partly due to the Argentine ants tendency to avoid competing with their own kind for food. Since these insects don’t compete with each other for resources, they tend to form supercolonies in nearly every region. These supercolonies then compete with other insect supercolonies within the same region. If no other supercolonies are around, then these ants will dominate their enemies with tremendous speed and efficiency. And this is how an ant from Argentina became the most numerous ant in one of the largest states in America.

Although Argentine ants are survivors, and thrive in just about every region where they are introduced, these ants do have their preferences. These ants enjoy dwelling within areas that are humid and warm. If a particular region is not sufficiently warm and humid enough for Argentine ants, then they will  move into people’s homes. For this reason Argentine ants are commonly found among pest control professionals.

Have you ever experienced an ant presence in your home? If so, were the ants all of the same type?