A Bizarre “Frankenstein-Bug” Has Been Discovered Preserved In Amber

A Bizarre “Frankenstein-Bug” Has Been Discovered Preserved In Amber 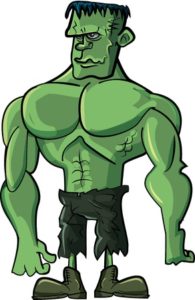 Nobody needs to tell you that the story of Frankenstein is completely fictional. With the exception of some types of transplants, there is no truth to the Frankenstein tale. Well, not for humans anyway. Recently researchers were out searching for well-preserved fossils when an entomologist happened upon the most bizarre looking insect that he had ever seen. The man’s colleagues agreed that the fossilized insect was unlike any other insect that anyone had ever laid eyes on. This preserved insect can be seen through the light brown shade of amber easily, and it has a few strange features. For example, the fossilized bug has the face of a wasp, but with no wings, the legs of a grasshopper, the antennae of an ant, and the body of a cockroach.

This insect was living during the cretaceous period around one hundred million years ago, and today this extinct insect is referred to as Aptenoperissus burmanicus. According to the study co-author, George Poinar Jr., he and the rest of his team had no idea what they were looking at when they found this Frankenstein bug. The bug is so rare in appearance that entomologists were forced to create an entirely new animal family just for this strange insect. The insect appears to have been durable, tough and robust, and it could have probably caused some painful stings. When this bug died out so many years ago, it was not followed by any direct descendants. In other words, the death of this bug was an evolutionary dead end.

This well-preserved and odd bug was discovered encased in amber in the Hukawng Valley in Myanmar. Nearly all of the fossils located in this area are well preserved, which makes it a hotspot for entomologists and other scientists. After finding, and then taking the fossil to a number of experts, they all agreed that they had no idea what type of bug they were looking at, due to the bug’s strange features. Although this bug is a dead end evolutionarily, researchers are still trying to determine which other insects may be of distant relation to this Frankenstein bug.

What type of insect would you say is the strangest looking insect of them all?