Black Widows Use Their Silk To Combat Rodents

Black Widows Use Their Silk To Combat Rodents 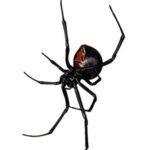 When we think of black widow spiders we think of painful and venomous bites that may kill. However, researchers are learning that these notorious spiders are capable of defending themselves in multiple ways, and not just with the use of venom. Black widows use their venom when attacking prey or biting animals or humans, but when battling larger sized rodents, a different combat technique becomes necessary. Not only do black widows often fight rodents, but, amazingly, they also win most of the time. When it comes to fighting off superior sized rodents that possess greater physical strength, the black widow will resort to spraying its rodent enemy with silk. This particular method of black widow combat is fittingly referred to as “silk flicking”.

Not surprisingly, the defense-response differed in all three cases. When the spiders were poked once, they simply retreated in annoyance, but when the spiders were poked numerous times, the spider retreated and played dead before flicking a small amount of silk. However, two percent of spiders undergoing the mid-threat simulation attempted to bite the researcher’s finger. In fact, the black widows only bit once their entire bodies were repeatedly pinched. This shows that black widows will only attempt to bite if they perceive an imminent threat that leaves them no other choice but to viciously defend themselves form their attacker. The results of this study should come as comforting news to arachnophobes who are afraid of sustaining venomous black widow bites, as these spiders only seem to attack when their life depends on an aggressive style of defense. This makes sustaining a black widow bite highly unlikely, unless you pick it up and squeeze it of course.

Have you ever spotted a black widow in the wild? If you have, did you approach it, or try to trap it?