Can The Termite Species That Inhabit The US Damage Underground Electric Cables? 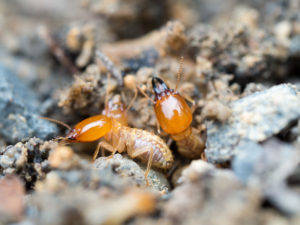 Formosan and Asian subterranean termites are typically recognized by experts as being the most destructive termite species in the world, and both of these species have established an invasive presence within the United States. Considering their reputation in this regard, one would think that if any termite species could chew through power cables, then it would definitely be one of these two, or both. However, researchers were surprised to find that this is not necessarily the case, as some of the typically less destructive subterranean termite species damage power cables more often than the most destructive species.

When considering a particular termite species’ ability to cause power outages, it must first be determined which termites are capable of penetrating cable sheathings. Generally, cable sheathing that is made from low density polyethylene is one of the least termite-resistant sheathing materials that are commonly used while PA12 (Nylon 12) has been demonstrated as the most resistant to termite pest activity.

Surprisingly, Formosan and Asian subterranean termites only cause minimal, if any damage to cable sheathings despite these two species inflicting the most costly structural damages of all termite species. The R. flavipes, or the eastern subterranean termite, which is the most destructive termite species in the US in front of the invasive Formosan species, is not capable of causing damage to any common cable sheathing. This is good news for Americans, but the termite species that causes the greatest amount of destruction to cable sheathings are the Australian species known as C. acinaciformis and M. darwiniensis. This is not surprising, as these termites have been destroying electric cables since they were first installed below the ground in the country back in 1911.

The unusually large mandible size of worker and soldier termites in these two species is probably what enables them to chew through cable sheathings more effectively than other species. Both the native and non-native subterranean termites that inhabit the US are not capable of inflicting serious damage to underground cables. Subterranean termite damage to power cables has only been a problem in Australia, and to a much lesser extent, Asia.

Do you believe that termites in America can still cause power outages by damaging telephone poles or other forms of infrastructure?