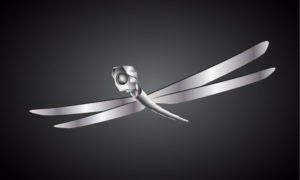 You have probably heard about the new cyborg insect trend in the field of robotic engineering. Engineers are often trying to find new ways to make moving machines more efficient, and it turns out that insects make a great model to base these cyborgs on. Insects are efficient movers as they have multiple legs that helps them navigate on non-flat ground, and they don’t expend to much energy getting around. Several academic institutions have recently partnered up in order to build robotic dragonflies that will help government officials gather more reliable intelligence. The robotic dragonfly will also serve as a reconnaissance tool in the field.

The United States Military is calling this new robotic insect DragonflEYE. The robotic dragonfly could be thought of as a miniature drone that will be spying on our enemies. These drones are being developed mostly in secret by military scientists, and these new insect robots are supposed to be a major improvement on past robotic insects. For example, the new dragonfly drone is more agile, lighter and smaller.

There are currently many programs in existence that are building insect-inspired drones, some of these projects are carried out by the military, and others are produced by private corporations. Nearly all of these programs are building drones that mimic the movement of insects.

The dragonfly is an unusual insect in that it uses four separate wings to fly. All of these wings are independently controlled, and there are not many creatures in the wild with this ability. These four independently functioning wings are important for the military because each wing allows for a different flying style. Hovering, turning corners, accelerating, moving up and down and from side to side are some of the different movements that only particular wings on the dragonfly are capable of producing. These separate wings will allow remote control drone pilots to have improved control over the robotic dragonflies movements.

Which insect do you think would serve as a good model for insect-drones?