How Did Deadly Fire Ants Arrive In America?

For the past several decades, the amount of humans who have died as a result of fire ant bites has been increasing dramatically. Ants are not typically associated with ferocity, aggressiveness or attacks on humans, but for the past 80 years, America has become a breeding ground for a particularly dangerous ant species that is native to South America. These ants are commonly known as “red-imported fire ants.” 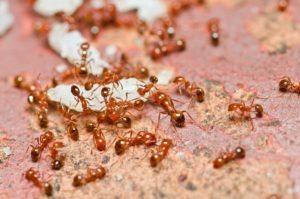 We often hear about people sustaining bites from fire ants in America, and while their stings are reportedly painful, deaths do not typically result, right? While fire ant bites are common, it must be known that there exists over 280 species of fire ants in the world today. The red-imported fire ant happens to be one of the few species that can cause death in people who sustain their bites.

This deadly fire ant species was accidentally imported into the United States from a cargo shipment that departed from Brazil a little more than 80 years ago. The Brazilian cargo was first unloaded at a port in Mobile, Alabama, and since then they have spread across the southeast and they sometimes wind up in northern states. What makes red-imported fire ants particularly dangerous is their resemblance to typical ants. Red-imported fire ants are just as small as the ants you see regularly, but they are far more aggressive than typical ants that are native to North America.

Fire ants dwell within mounds that appear as small bumps in the ground. If a person were to inadvertently make contact with one of their mounds, the fire ants would immediately swarm out of their nests in order to attack the unsuspecting victim. Their bites cause victims to experience a very painful stinging sensation and they leave behind red marks that rapidly form into blisters or pustules. In most cases, injuries caused by red-imported fire ants will go away on their own unless they become infected. For those who are allergic, immediate medical treatment is necessary in order to prevent death from anaphylactic shock.

Back in 2006, a 68 year old woman died because of several fire ant bites she received on her ankle while she was gardening. Initially the woman did not notice anything was wrong, but by the time she did, it was too late. If you believe that you have sustained bites from fire ants, then medical attention should be considered.

Have you ever been bitten by fire ants?