A Deadly Hornet May Be Dwelling In America Now

A Deadly Hornet May Be Dwelling In America Now 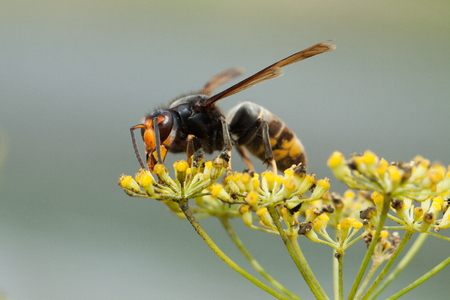 A hornet that is commonly referred to as the Japanese, or Asian, Giant Hornet is not only an invasive insect, but it is also a murderous nightmare of a creature. Unfortunately, there is good reason to suspect that this dangerous hornet has established itself in the United States. For several years people in the United States have been hearing horror stories about this hornets sting. The hornet had successfully gained ground in regions where it was not native, which caused experts in America to fear that their country was going to be the next invasion spot. Once this hornet inserts its stinger into human flesh, a victim’s skin literally melts off as though it had become soaked with sulfuric acid. This insect’s sting can rapidly break down human blood. In addition to that, these hornets also appear menacing as their relatively huge frames can reach two inches in length, and queens can reach three full inches. Asian hornets also fly at unbelievably fast speeds that reach thirty miles per hour, which is as fast as many small birds. This hornet has already been spotted by people in multiple American states including Alabama, California, Georgia, Illinois, Indiana, Iowa, Kentucky, Louisiana, New Hampshire, New Jersey, New York, North Carolina, Ohio, Oklahoma and many more. However, there exists disagreements concerning this hornets alleged presence in America. Some sources insist that the hornet is alive and well in the US, while other sources claim that it has not yet arrived in the US, but likely will eventually.

The Asian hornet kills an average of forty people per year in Japan, and Chinese officials have reported a similar amount of deaths per year in various Chinese provinces. These hornets have massacred as many as thirty thousand bees in a mere three hours of time, effectively killing the largest honey bee populations that can exist in hives. The manner in which these hornets kill bees and other insects is horrific. The hornets chop up insect carcasses with their sword-like teeth, littering the area with butchered insect carcasses. If these hornets have not arrived in America, you can be sure that they will soon.

Have you heard about the Asian giant hornet scare in the United States?