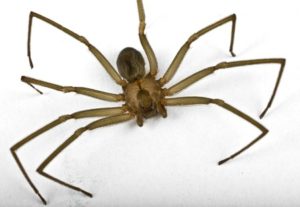 Summertime has officially arrived, and many people are already eagerly trekking outdoors. However, in the midst of all of the fun you are having with your friends this summer, venomous spiders lurk around every corner. You already have to worry about contracting Zika through mosquito bites, so how could it get any worse? Well, one child’s story about finding a giant brown recluse in his clothing may have you checking your shoes a few times before slipping them on.

A seven-year-old boy from Kansas, Greyson Bryant-Stuckey, opened his closet one day in order to put on his new Iron Man suit. Greyson was excited about his new outfit, but then he sustained a bite from a terrifying looking spider hanging out within his costume. Initially Greyson had felt a welt where he had been bitten. Shortly afterwards he felt the welt become larger until it eventually formed into a rash that quickly spread to his entire back. According to Greyson, the pain kept increasing until it became intolerable.

Greyson’s mother, Leanne Bryant, promptly took Greyson to the doctor where the doctor seemed sure what it was that caused Greyson’s rash. The doctor claimed that a “brown spider” had bitten Greyson. However, the doctor was not entirely correct. While Greyson had sustained a spider bite, the bite did not come from a brown spider, rather the bite was made by the notorious brown recluse spider.

The brown recluse spider is venomous, and it can cause extreme pain, but rarely death. Sometimes, bites from brown recluse spiders can necrotize the flesh, leading to skin grafts, and/or amputations. According to Exterminator, Craig Betts, brown recluse spiders are abundant within human environments, but they still tend to dwell within areas where people rarely venture, such as garages, or attics. The spring and early summer months always bring about an increase in brown recluse related hospitalizations, so be cautious this summer.

Have you ever personally seen what a bite from a brown recluse looks like on a persons skin? If you have, did the person visit the hospital as a result of the bite?