An Exterminator Removed A Refrigerator-Sized Nest Containing Millions Of Wasps

An Exterminator Removed A Refrigerator-Sized Nest Containing Millions Of Wasps 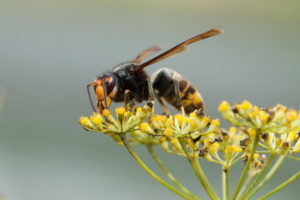 Stumbling upon a wasp nest can be frightening, especially if it is still active. Wasps are well known for being much more aggressive than the vast majority of bee species, and many of them will sting victims repeatedly. There are numerous wasp species that build nests of different types. Some wasp nests are located high up in trees on branches. While other wasp nests are located beneath the ground, like yellowjacket wasp nests. Yellowjackets are particularly frightening as thousands of them can swarm a person within seconds by flooding out of their underground nests. Very few yellowjacket attack victims anticipate their attacks since their nests are not easily detected. It goes without saying that wasp nests should always be removed by a professional pest control officer. However, sometimes even the most seasoned professionals can become terrified of the active wasp nests that they are called upon to remove. For example, several months ago a pest control professional in Louisiana removed a wasp nest that was as large as a refrigerator from a family’s home. The entire removal took forty five minutes and it was recorded on a GoPro. The footage can now be viewed on YouTube.

Not long ago an experienced pest control professional named Jude Verret was called to a residence in Patterson, Louisiana in order to remove an enormous nest that contained millions of European yellowjacket wasps. Verret was dressed in a beekeeper’s outfit and armed with a shovel to hack the refrigerator-sized nest out of the shed. Once Verret entered the shed, his GoPro footage captured the flurry of yellowjackets that were aggressively dive bombing everything in sight. Verret has been removing the nests of dangerous insects from people’s property for over twelve years, but this nest is one of the largest that he had ever seen. Typically, when Verret removes an insect nest he can expect to get stung a few times, despite his protective gear. Amazingly Verret did not sustain any yellowjacket stings while removing the colossal nest.

Did you ever play with insect nests that you found as a child? Have you ever encountered an active wasp nest?