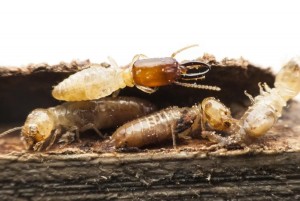 Today all Americans have heard of termites, but there was a time in American history when termites were little known creatures that were thought to exist only in the tropics. Back in 1933 the City of New York experienced the first large-scale termite swarm in the city’s history, and residents were terrified. During the 1920s and 1930s entomologists were not sure as to how the termites arrived in the city. It was theorized that the invading termites had arrived in the US by shipping vessels. Members of the New York Entomological Society held regular meetings within the American Natural History Museum in order to discuss the repeat termite swarms, and the damage that termites were causing to property.

Newspapers at the time certainly did not help to reduce the fears that so many Americans had concerning these otherworldly wood-eating creatures. For example, newspapers, such as the New York Times, described termites as “ant-like” creatures that damaged telephone poles and apartment buildings, and that they lived underground where they could not be captured. Newspapers printed the names of streets where houses and apartments were thought to have succumbed to termite infestations. The termites were described as being able to devour all types of wood with relentless determination. In fact, termites were even believed by some at the time to be capable of penetrating concrete. The New York Times described how a newly married couple’s home had become a haven for termites, which resulted in a piano falling through the floor and into the basement.

For several years smaller-scale termite invasions had been occurring every year prior, but the year of 1933 seemed to show a marked increase in termite activity in New York City. Reporters for the New York Times described the citywide termite invasion as being on par with a similar invasion that had occurred a couple of years prior in California. Apparently the Pasadena Public Library had become infested with termites. Soon after, the entire state of California had fallen victim to termite infestations. Due to a lack of development and understanding concerning chemical insecticides, they were not even a consideration at the time. The nationwide termite panic was mainly the result of claims made by a renowned entomologist, George E. Sanders, who owned a chemical company in New York City. Sanders was the primary speaker at the entomological society meetings. Sanders recommended erecting termite proof buildings, or making use of metal sheets to act as barriers to keep termites from infesting homes and buildings.

Why do you think that termite population sizes increased so dramatically during the 1920s and 1930s?