Termites are easily the most economically costly structural pests in the world, and according to the US Department of Agriculture, several species of subterranean, drywood, and dampwood termites inflict up to seven billion dollars worth of property damage annually in the United States alone. A 2002 study found that when the costs of both control services and damage repairs are taken into account, the annual economic impact of termite pests likely reaches 11 billion dollars in the US. The vast majority of this money is spent controlling and repairing damage inflicted by subterranean termite pests, as the habitat range of both drywood and dampwood termite pest species is restricted to the far western and southernmost states. The native eastern subterranean termite (Reticulitermes flavipes) is the most widespread, and therefore, the most destructive termite pest in the US. In Louisiana, however, this species has been largely replaced by the tremendously destructive and invasive Formosan subterranean termite (Coptotermes formosanus). 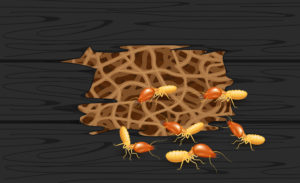 Along with the closely related Asian subterranean termite (C. gestroi), the Formosan subterranean termite (FST) is the most destructive and economically damaging termite pest species in the world. According to a recent study, the global economic impact of annual FST activity stands at 30.2 billion dollars, and half of this figure can be attributed solely to control and damage repair costs in the US. Most of this destruction occurs in New Orleans, specifically the French Quarter where old pre-code buildings of historical significance are especially vulnerable to extensive FST infestations. Due to the FST’s tropical origin, this species is unable to avance northward beyond the southernmost Gulf Coast states, as well as southern California and North and South Carolina where the humidity and short and mild winters allow these pests to thrive.

Despite their limited habitat range, property damage resulting from FST infestations accounts for a significant portion of the total economic cost of annual termite damage in the US. According to decade old data, the annual cost of FST damage repairs in the most affected state, Louisiana, comes to about 500 million dollars annually, 300 million of which occurs in New Orleans. Despite the 15 year long multi-million dollar federal- and state-led effort to halt the continued spread of FST in Louisiana, the pests are clearly advancing further north in the state. By the turn of the millenium, FSTs had not advanced beyond the southernmost Louisiana parishes, but by 2006, FST infestations were found in homes as far north as St. Landry, and Evangeline. Today, experts consider homes in every area of Louisiana to be at risk of sustaining damage inflicted by FST pests.

Is your home currently protected from termite attacks?