Each Insect Species Speaks Its Own Unique “Dialect”

There is only so much that humans can learn about insects. All knowledge that has so far been gathered concerning the nature of different insect species is, of course, objective knowledge. There is no way for a human to subjectively experience the consciousness of an insect, if they even have this capacity. Relying solely on objective and empirical knowledge in order to better understand the nature of insects is no doubt valuable, but how can we humans ever know if insects have thoughts, feelings, hopes, dreams or an ability to carry on conversations with other insects? While it may be a stretch to claim that insects are capable of carrying on conversations with other insects, researchers have recently demonstrated that at least some insects can communicate ideas effectively with other members of their species. Not only that, but the researchers also found that fruit flies can learn new and unfamiliar “dialects” that are communicated by different insects species. 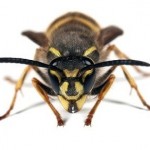 Scientists have long known that insects do communicate to some degree. At the very least, insects instinctively communicate by sending physiologically produced signals to other insects in a group in order to facilitate group oriented tasks. For example, termites produce vibrations in order to alert other termites within a colony of an impending predatory attack. Termites, and many ants, also communicate by producing and emitting odors known as pheromones. These pheromones are then sensed by other termites, which prompts them to behave in a particular way. However, a breakthrough in the science of insect communication has recently been made. A recent study demonstrated that fruit flies use wing movements in order to alert other fruit flies of nearby predatory wasps.

Fruit flies are victimized by parasitic wasps that lay their eggs within fruit fly larvae. When a fruit fly spots a nearby wasp, it will flap its wings in a particular manner in order to announce the danger to nearby fruit flies. After receiving this signal, other fruit flies lay fewer eggs in response to the impending danger to their offspring. The researchers also found that closely related fruit flies communicated more effectively than distantly related ones. Despite this, the distantly related flies eventually learned to communicate with new groups by becoming familiar with their dialect. The fly learned the new dialect gradually after spending a period of time cohabitating with the new group. Further research showed that fruit flies use a particular part of their brain that is associated with memory and learning while being immersed in an environment where a different dialect is spoken.

Do you believe that other types of insects likely possess more sophisticated communication abilities?