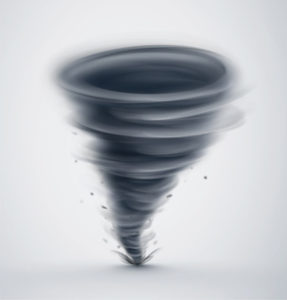 You should consider yourself lucky if you do not live in a region of the United States where tornadoes are common. However, in areas across the globe, swarms of insects have been creating vortexes that resemble tornadoes. These insect vortexes have also been referred to as “bugnadoes”. Although frightening in appearance, bugnadoes do not cause extensive property damage, as tornadoes do. Many different types of insects can form these bugnadoes, such as locusts, midges and even grasshoppers.

Bugnadoes are nothing more than very large insect swarms. As adults, midges will swarm in vast numbers in order to locate mates. Midges develop while underwater. In areas where large fields have become flooded with water, midges can reproduce at astonishing rates. These flooded areas provide temporary, but nutrient rich ecosystems that can serve as hotspots for sizable insect swarms. In situations like this, bugnadoes are likely to take place.

According to Senior Meteorologist Bob Smerbeck, the tornado-like appearance of these insect swarms may be caused by thermal uplift, which occurs when the sun heats the water-soaked ground. Instances of thermal uplift can be observed when the sun rises among a fogged out region. As the sun burns the fog away small vortexes can be seen forming in various areas; bungadoes may occur as a result of the same climatic phenomena. In July of 2010, a storm chaser and photographer, Mike Hollingshead, spotted a bugnado in a region of Iowa that had been flooded by the Missouri river. The flooding was naturally surrounded by dead vegetation that the aquatic insects had been consuming. The insect population grew to amazing proportions in the area as a result of the unusually abundant resources available to aquatic insects. This flooding created the perfect conditions for an eventual bugnado. Bugnadoes can occur in just about any region, even the southwestern region of the US.

Have you ever spotted a “bugnado”?