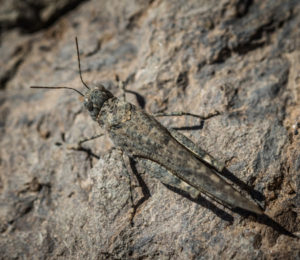 Over the course of evolution spiders and insects have adapted to blend in with their environments, some more than others. Some insects don’t even look like insects, but more like leaves. For any arthropod, having good camouflage can be a lifesaver. Scientists recently unearthed thirty five arthropod fossils that had been encased in amber for millions of years. These fossils are unique because they offer entomologists a glimpse of how important camouflage was to early insects. Some insects blended in with their environments, while other insects used the corpses of their fallen enemies as body suits to fool, what must have been, some pretty stupid insect-predators.

Lacewings don’t just use their enemies corpses as camouflage, they would also use sand, dust, wood residue, and plant matter to cover themselves, and therefore avoid the attention of predators. Some lacewings would even turn their legs 180 degrees in order to place grits of sand on their backs, obscuring themselves from dangerous predators. Other lacewings would use plant matter to cover their bodies, which made them invisible to early predators. Lacewings are just one good example of how early insects used camouflage before nature endowed insects with natural camouflage. Camouflage is so important to the survival of insects, that nearly all insects have evolved some degree of camouflage during the course of evolution.

Can you think of any spider or insect that is so predatory in nature that it does not need to adapt to camouflage? If you can, which arthropod did you come up with?