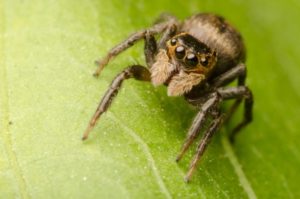 Now, I can understand insects having beautiful colors or other mating rituals and things to attract a mate such as a kind of dance or play, but I haven’t connected a children’s hand game with sex since I watched Patty-Cakes being linked to the act in Who Framed Roger Rabbit. This time it’s not Patty-Cakes these spiders are playing to catch a mate, but rather Peekaboo.

The male Jotus remus, a newly discovered species of Australian jumping spider, has an unusual appendage connected to their third leg on each side that is shaped like a heart. So, what exactly is it designed to do? Well, it’s the perfect thing for playing Peekaboo! When a male spider is trying to woo a female he will hide under a leaf that the female is sitting on, and thrusts out the heart-shaped paddle high enough that the female on the top side of the leaf can see it. He waves his paddle in front of her and then pulls it out of sight over and over again, in a strange spider version of the game Peekaboo. He does this until he has enticed her to jump down and see who the heck is playing peekaboo with her.

The spider wouldn’t been discovered if it hadn’t been for a man named Jurgen Otto that went out camping between Christmas and New Year’s one year. He first saw the spider on his tent after he returned home from his camping trip. He spotted the spider hanging out on the outside of his tent, and was intrigued when he saw the spider’s strange paddle-like appendages shaped like hearts. He actually returned to his campsite to collect more of these new spiders, but wasn’t able to figure out right away what the strange appendages were.  It wasn’t until he put some males and females together that he witnessed the spiders using their love paddles to seduce a mate. I think this may be the first spider that knows how to play a clapping game.

Have you ever witnessed odd behavior in spiders that may have been some kind of odd mating ritual or other something similar? What were they doing and what do you think they were doing it for?