Jumping Spiders Have Eyes That Are As Sophisticated As Telescopes

Jumping Spiders Have Eyes That Are As Sophisticated As Telescopes 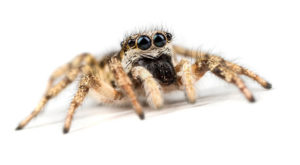 Recently an administrative worker experienced a bit of a spider problem in her office building. One day a spider fell from the ceiling and landed on her head, then it happened again, and again. Eventually, the woman had the spiders identified as zebra jumping spiders. Zebra jumping spiders are unique, even for jumping spiders. This is because jumping spiders have advanced eyes that can perceive more colors than humans can. The woman’s friend, and astronomer, recommended chasing the spiders out of her office with a laser pointer; similar to how cats chase the red dot made by laser pointers. And surely enough, the spiders did, indeed, chase the laser-dot. However, the two friends noticed that the jumping spiders became more excited over green colored lasers, but they did not know why. After posting their videos on social media sites, a spider expert contacted the two with an explanation for the spider’s preference. It turns out that jumping spiders have specialized eye-cells devoted to perceiving green colors. Not only that, but the eyes of a jumping spider are so acute that they can see all the way to the moon.

The eyes of a jumping spider are similar to Galileo’s telescopes from the early 1600’s. These early telescopes were made with two lenses and one tube, with one lense on each end of the tube. The only other animals on the planet that have telescopic vision like this are chameleons, falcons and, of course, jumping spiders. The jumping spider also has two lenses for each eye, and a long tube in between. The top lens collects and focuses the light, while the bottom lens spreads the light out to form a magnified picture.

Have you ever stood close enough to a spider to make out its eyes? If you have, then what did they look like?