It Is Only June, But Disease Carrying Mosquitoes Have Already Been Found In New Orleans

It Is Only June, But Disease Carrying Mosquitoes Have Already Been Found In New Orleans 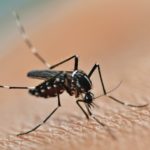 The city of New Orleans has confirmed that at least two mosquitoes captured in the city had been carrying the West Nile virus. Additionally, officials from two parishes, St. John, Tangipahoa, and St. Tammany, have also reported the presence of West Nile-infected mosquitoes. According to Dr. Fred Lopez with the LSU Health Infectious Disease Department, this is the time of year when people start contracting mosquito-borne infections, and this will continue to be a concern in the coming years as well.

More than eighty percent of people who contract the virus do not experience any symptoms. Twenty percent of those infected will experience a severe flu-like fever shortly after contracting the virus. One pest control professional operating in Louisiana says that finding a few disease-carrying mosquitoes in urban areas is no reason to panic, but it is a good reason to start being vigilant. He goes on to say that mosquitoes are at they’re most active during the one hour before and after dusk. This is also a good time to kill mosquitoes that may be congregating near your home. Pest control professionals will also spray yards in order to temporarily prevent mosquitoes from invading your property.

Are you going to take more precautions against mosquito-borne infections this year?