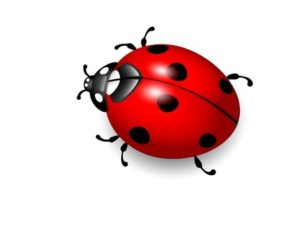 Many people consider the ladybug to be their favorite type of insect. Apparently, ladybugs are far more pleasing to the eye than other types of beetles. Now there is another reason to like ladybugs, and it has to do with how they fly. Engineers have become interested in ladybugs on account of their ability to fold their large wings origami-style into their shells. This natural ability could lead to innovations in the way engineers construct airborne devices.

A ladybug has hind wings that are four times its size. Instead of hauling these bulky wings around with them, ladybugs fold their wings in an intricate manner in order to fit them within their shells. Once a ladybug is ready to take off, it will deploy its wings in only one tenth of a second. When the ladybug is ready to land, it takes two seconds for it to fold its wings into its abdomen.

The ladybug alternates between crawling and flying several times throughout a day, and ladybugs can travel long distances. The human eye is not sophisticated enough to see the ladybug fold its wings as rapidly as it does, but engineers have recently used state of the art technology to view this process with clarity.

The hind wings of a ladybug are sturdy enough to allow the bug to remain in the air for a period of two hours. Imagine three Empire State buildings stacked one on top of the other, and now imagine a ladybug flying that high. That is an impressive height, and they can reach speeds of up to thirty seven miles per hour. Despite these extreme flying abilities, the ladybugs wings can become tucked away in an instant.

One engineer, Kazuya Saito, is referring to ladybugs in order to build deployable structures like satellites, or solar power systems for aircrafts. Saito has learned that the ladybugs secret lies in its ability to fold its wings rapidly. Now Saito and his colleagues are looking to replicate this design mechanically.

Which other insects do you think could serve as valuable models for mechanical engineers looking for new and more sensible designs for moving vehicles?