Leafcutting Bees That Grow Up Fast Cause Serious Problems For Beekeepers

Leafcutting Bees That Grow Up Fast Cause Serious Problems For Beekeepers 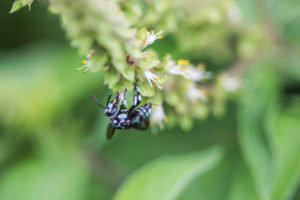 We humans know that receiving the proper nutrients during childhood is necessary for a healthy development. But what about an insect’s development? Does an insect’s physiology demand a certain amount of nutrients for proper development? A recent study on bees has determined that nutrient intake can determine how quickly alfalfa leafcutting bees reach adulthood. Some bees grow rapidly as long as they have access to a variety of nutrients. Other bees can stop developing for a period of time if they are not provided with enough nutrients. However, both types of bees are genetically similar. It turns out that nutrient intake can determine growth rates in bees by altering the bees genetic expression during the larval stage. Professional beekeepers prefer bees that experience a period of suspended development over bees that grow rapidly. This dormant stage is known as “diapause.” Bees that reach maturity without diapause often cause beekeepers a number of problems.

A bees genetic makeup, coupled with its nutrient intake while in the larval stage, will determine whether or not a particular bee larva will experience diapause. Some environmental factors, in this case nutrient intake, will determine how certain genes are expressed. Environmental factors, and the effect these factors have on gene expression, is a phenomenon that is known as “phenotypic plasticity.”

Although bees are genetically similar during the earliest stages of development, the amount of nutrition that they receive determines how their genes are expressed. This gene expression then determines whether or not a bee will enter into diapause. During this pause in development, the prepupa will lie dormant during the winter, and then hatch and reproduce during the following spring.

Bees that experience diapause are also preferred by farmers because the once latent bees can begin pollinating at the start of the spring season, and continue until they die. The faster growing bees, on the other hand, reach adulthood too late in the season. Therefore these bees cannot pollinate nearly as many plants as their diapuasing counterparts. Since leafcutting bees are bred for their commercial value, bees that experience diapause during the larval stage increase profits for agricultural companies.

Do you know of any other insects that can experience diapause at some point during their development?