Some arachnid enthusiasts insist that spiders are, in fact, beautiful creatures. Many arachnid lovers are convinced that the supposed elegance and charm of spiders is tragically lost on those who fear them. Although beauty is subjective, most people would probably agree that animals such as horses, lions and peacocks are more deserving of the label than spiders. That being said, there is no denying a spider’s talent for web design. Of course, spiders are not tech savvy creatures with a knowledge of computer software; instead, spiders are capable of building awe-inspiring silk webs that even the most fearful of arachnophobes could not disparage. Not all spider webs appear as silken masterpieces of near perfect symmetry. The group of arachnids known as orb-weavers are the most gifted of all web-building spiders. While orb-weaver spiders create the most geometrically sound web designs, all spider webs are built to last, as they are more durable than steel and tougher than kevlar. However, as durable as spider webs are, it is odd to find one that has lasted for 140 million years, but this is exactly what a group of researchers recently found in England. 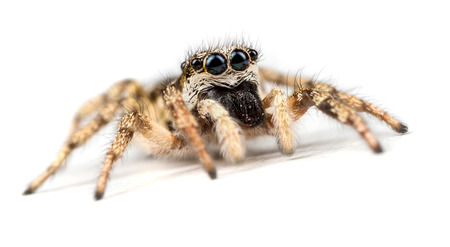 It should be mentioned that the ancient spider web was fossilized in amber, but this is still impressive considering that amber fossils only form around objects that are durable enough to make an impression on viscous tree resin. This discovery also shows that a spider web can maintain structural integrity during the long process of amber-fossilization. Upon microscopic examination, researchers found that the fossil contained a sticky substance that modern spiders use to fuse silk strings together during web construction. Spiders adapted the ability to produce this sticky substance in order to capture a greater amount of prey, as well as larger sized prey.  According to paleobiologist Martin Brasier of Oxford University, these droplets indicate that spiders coevolved with insects, which is notable considering that researchers have long assumed that spider evolution occurred later than insect evolution. The fossilized web was created by an extinct ancestor of orb-weaver spiders during a time when dinosaurs roamed the earth.

Do you believe that possessing eight legs gives spiders a specific advantage that has not yet been considered by scientists?