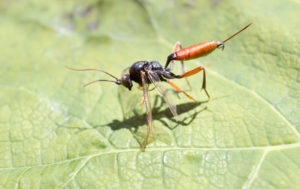 The belief that beetles comprised the greatest amount of species may have originated as a bias against other insects. For example, beetles are often picturesque and relatively large insects that make for great collectors items. Also the bodies of dead beetle specimens do not degrade as rapidly as other insect species. Once a beetle’s body dries out, it remains intact, as opposed to falling apart like most insect specimens eventually do. Even famed biologist Charles Darwin himself had a vast beetle collection that he happily showed off to guests. To put it simply, people have always been excited to learn that another beetle species had been discovered. But when it comes to tiny parasitic wasps, this excitement had always been hard to find.

Do you think that the lack of certainty about what defines a truly unique species makes the comparison between beetles and parasitoid wasps distorted?