The Plant That Hunts And Consumes Live Wasps

For those of you who are interested in nature’s most bizarre productions, you have probably heard of insect-eating plants. Plants that feed on insects are not necessarily common, and most people assume that carnivorous plants are fictional monsters, similar to giant man-eating sea-clams. Although carnivorous plants are not often stumbled upon in nature, they certainly do exist, and some appear more intelligent and cunning than others. 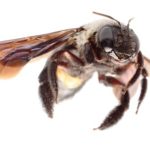 Oak leaves often develop deformities that involve the swelling of leaf tissue. These inflamed tumors are known as “galls,” and they look like bulbous formations located on the undersides of oak leaves. As it happens, this tissue-growth is prompted by parasitic wasps. These wasps use galls as a form of safe shelter for their developing eggs, but if you were to look into some gall formations, then you would likely find a few mummified wasp corpses. Why is this? Well, the answer to this question may disappoint the world’s many wasp lovers. Sadly, many parasitic wasp offspring never get to experience the joys a long two-week life, as a type of vine literally hunts developing wasp offspring that are located within galls.

Unlike Venus flytraps, these parasitic and carnivorous vines move in the direction of galls that are inhabited by developing wasp eggs and larvae. Venus flytraps are unable to seek out their insect prey in this manner. Once a love vine penetrates an inhabited gall, they suck all of the nutritious fluids out of the wasp larvae shortly before they emerge from their homes and into adult life. This is why many researchers who have looked into galls have found mummified wasp corpses that had been drained of their vital fluids. Although the carnivorous nature of the love vine has been known to scientists for over a century, the first study exploring the relationship between these vines and their insect prey has only occurred recently.

Since the carnivorous nature of love vines has been known to researchers for just a little more than a century, do you believe that other undiscovered insect-eating plants exist in nature?