The “greenhead fly” (Tabanus nigrovittatus) and several other horse fly species in the Tabanidae family emerge from coastal Louisiana marshland every year before harassing residents of southern Louisiana. Horse flies emerge as early as February, and they are notorious in the Gulf Coast region for inflicting very painful bites in order to collect blood meals. Horse fly mouthparts are composed of six serrated blades that easily cut into human skin, but both male and female horse fly pests feed mostly on plant sap. However, the female horse fly collects blood meals from several animals including humans in order to obtain the nutrients necessary to produce viable eggs. Up until 2018, biting greenhead flies had been largely absent from Louisiana for several years, and while this may have been a welcome change for residents of New Orleans and Baton Rouge, the return of greenhead fly pests is a surprisingly good thing from an ecological standpoint. 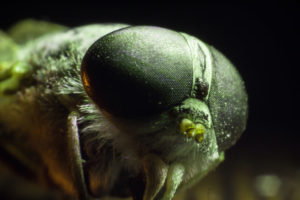 Greenhead flies are ecologically essential, as numerous coastal animals like shore birds and dolphins rely on a steady supply of greenhead flies for food. Unfortunately, greenhead flies disappeared after the 2010 Deepwater Horizon BP oil spill, and as a consequence, native wildlife suffered the loss of a reliable food source. Unfortunately, greenhead flies are attracted to oil, as entire adult populations darted head first into the BP oil spill after they misperceived the oil slick for glistening fresh ocean water shortly after the disaster occurred a decade ago. However, the reemergence of greenhead flies two year ago indicates that the Gulf Coast ecosystem is recovering from the massive oil spill. Experts have been anticipating the reemergence of greenhead flies along the Louisiana coast for several years, and their seasonal prevalence has been gauged annually in an effort to determine the rate at which the coastal ecosystem has been recovering. In Louisiana, the striped horse fly (Tabanus lineola) is the most common biting fly pest species, and another Tabanidae horse fly species, the yellow fly (Diachlorus ferrugatus), is considered the most aggressive biting fly species along the Gulf Coast, as they persistently and vigorously attack both humans and pets.

Have you ever been attacked by horse fly pests?