There exists many insect species that most people find particularly revolting. Cockroaches, bed bugs and many fly species are commonly cited for their filthy habits and  unsanitary living conditions, as well as their general ugliness. While many people would have no problem listing a number of insect species that they find disgusting, how many people can claim that an entire insect order is comprised of nothing but the most undesirable insects in existence? For those of you who don’t already know, this much maligned insect order to referred to as “hemiptera” and it is comprised of insect species that offend not just the eyes, but the nose as well. Most hemiptera insects are categorized as pests, and they are the last pests a person wants to find within their home, as many of them can release foul odors as a defensive measure. Some of the insects that make up the hemiptera group include stink bugs, bed bugs, litter bugs, scale insects and aphids. Most people are familiar with stink bugs and the foul odor that they produce, but other hemiptera insects are not as well known, even to experts. The hemiptera evolutionary tree is notorious for being spotty and incomplete. This is problematic since hemiptera insects are economically costly pests that could be better controlled with a comprehensive evolutionary tree showing the behavioral relatedness of different hemiptera species. In an effort to better control hemiptera insect pests, researchers are using genetic data to accurately complete an evolutionary tree of the insect order. 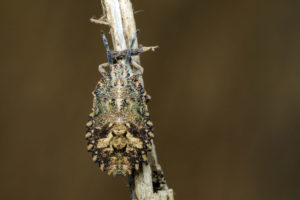 According to entomologist Christopher Dietrich, there exists 120,000 known species in the hemiptera order of insects, making this insect group one of the largest known. This massive number of hemiptera species is far greater than the total number of all vertebrate species combined, and they thrive in every habitat, making them well suited for establishing an invasive presence in regions where they are not native.

Do you believe that hemiptera insects survived to become one of the most species-rich insect order out of dumb evolutionary luck?