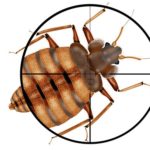 Bed bugs are a growing problem in the world today, and nobody is immune to their bites, not even supermodels. A few weeks ago, a Brazilian supermodel named Sabrina Jales St. Pierre filed a lawsuit over several bed bug bites that she had sustained while staying in a hotel. Many people may not sympathize with this supermodel’s bed bug issues, as many people are envious of the fact that supermodels seem to live a glamourous and pampered lifestyle. However, if you have ever experienced a bed bug infestation, then you probably would not wish the experience on your worst enemy. Some people may assume that supermodels are overpaid for stress-free work, and they would be right, but when your most profitable asset becomes damaged, in this case flawless skin, then maintaining a modeling career becomes impossible. This is why St. Pierre is suing the hotel over the bed bugs that she involuntarily shared a room with.

St. Pierre is suing the Embassy Suites Hotel in Palm Desert over a bed bug infestation that occured way back in 2016. Photos were posted online that show the bed bug bites that St. Pierre allegedly sustained during her stay at the upscale hotel. The large dime to nickel-sized welts are clearly visible in the close up photo of the model’s upper back. The model is being represented by the well known bed bug lawyer named Brian Virag.

Virag is notorious for winning cases in favor of people who claimed to have undergone bed bug attacks. Virag’s business webpage is named “My Bed Bug Lawyer”, and he has won several high profile bed bug cases against large hotel and apartment complexes. One of his victories saw his clients win more than three million dollars against an apartment complex.

Virag claims that the model suffered stress and humiliation after she returned to work bearing her bed bug-induced injuries. The model is suing the Hilton Hotel chain for damages that resulted from her stay in the bed bug infested hotel room. The dollar amount that the model is seeking to compensate for her trauma and injuries has not yet been disclosed.

Do you believe that the model in this news story is in the right for deciding to sue the hotel for the bed bug bites that she sustained while staying in one of the rooms?