Tarantula Venom May Be the Perfect Insecticide

Tarantula Venom May Be the Perfect Insecticide 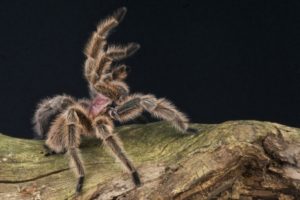 Tarantula venom packs quite a punch when you’re the poor insect getting injected with it. Scientists think it may work for killing off those nasty pests that ruin crops too. In a recent study, researchers found that this lethal brew can also be made into an insecticide that would kill off agricultural pests when they consume it orally. They found that it was particularly effective against the cotton bollworm, a much-hated pest that ruins many crop plants. Finding a new insecticide to use against these invaders could have a huge impact on farmers and our economy as a whole. Insect pests cut crop yields by a whopping 10 to 14 percent. On top of that they also damage 9 to 20 percent of the crops that make it out alive and are stored, only to be cut down right as they almost get to the finish line and our tummies. We already use pesticides to try and prevent this kind of loss, but over the years insects have grown resistant to them.

To get around the increasing resistance insect pests have to traditional pesticides, scientists are now looking into creating “bioinsecticides”, which use proteins that come from natural sources such as the venom of a tarantula. To study this new tarantula insecticide, scientists had to first milk venom from tarantulas, which I cannot imagine is a terribly fun activity. They then isolated a small peptide from the venom, fed it orally to cotton bollworms and termites, and then compared how it affected the insects given it orally versus the mealworms that were injected with the peptide. They found that when taken orally, the orally active insecticidal peptide-1 was just as effective at killing the pests as the synthetic insecticide they compared it with. When the venom peptide and the synthetic insecticide were combined into one super insecticide, which proved to be even more effective at killing those critters. The peptide proved to be more effective when used on cotton bollworms in comparison to its potency when given to termites and mealworms. This could be related to the fact that termites and mealworms eat stored grains instead of live crops.

This new insecticide made from the tarantula venom could literally revolutionize the farming industry. But that is not the only think scientists are interested in using spider toxins for. They could also use these spider venom peptides in medicine for therapeutic use.

Do you think using spider venom as an insecticide will be successful or is just another dead end for farmers? What other possible uses could we have for spider venom?