Most people consider termites to be nothing more than destroyers of houses. Those who hold termites in disdain can be forgiven; after all, recent estimates suggest that termites cause somewhere in between 1.5 and 20 billion dollars in property destruction each year in America alone. Termites are certainly destructive pests as far as homeowners are concerned, but termites are so much more than pests. For example, it is well known that termites carry out essential ecological duties by degrading plant waste and enriching soil. According to some researchers, termites also lay claim to many world records, such as longest insect life spans for queen termites, and they construct the largest terrestrial structures of any animal. Many species of termite queens can live for 25 years, or even longer. Termite mounds in Africa can be as large as thirty feet in height. Termites are also among the oldest of all living insect groups. Some experts place the emergence of termites as having occurred some 300 million years ago. However, many insect enthusiasts are not aware of the degree to which termites have evolved over their millions of years of existence. In fact, it has only recently been understood that termites evolved from ancient cockroaches, which makes termites a part of the cockroach order of insects. 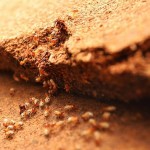 For 175 years it was believed that termites were the only members of the distinctive Isoptera order of insects. Termites were suspected as being members of the cockroach order, blattodea, around the 1920s, but it was not until 2007 that genetic evidence proved this to be the case. Hundreds of millions of years ago, cockroaches were solitary scavengers that ate fruit, rotten leaves, fungi and bird droppings. These cockroaches developed sacks of eggs that they would eject from their backsides at high speeds. These ejected eggs would be left to mature and fend against predators without help from their parents. Between 250 and 150 million years ago, the first termites evolved from these solitary roaches when they began eating and digesting wood. This was made possible by special wood-digesting intestinal microbes, but when termite intestines molted, all of these microbes were cleared out of their digestive tract. In order to solve this dilemma, these ancient termites began to share their gut microbes with other termites by ingesting microbe-rich feces in a communal manner. This way, all termites could possess these essential microbes. This feces sharing behavior is why termites became interdependent communal insects that live within colonies, and this behavior is still practiced by termites today.