Termites Mounds Come In Handy For Many Different Mammalian Animals

Termites Mounds Come In Handy For Many Different Mammalian Animals 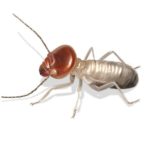 Termites are well known for the tall nesting structures that they build within the savannahs of Africa. These structures are commonly called “mounds” or “termitaria”. Termite mounds are intricately built to withstand predatory attacks. Termites are not considered aggressive creatures, and they are not well suited for battles with insect predators. However, when considering termites, it is the colony’s survival that matters, and not the individuals. This is why the sturdy termite mound serves as the primary mode of defense for colonies of some termite species. Ants, the most significant termite predators, cannot penetrate the hard external surface of termite mounds. Unfortunately for termites, ants are not the only animals that make a habit out of breaking through termite mounds. Some of the fiercest predators in the animal kingdom regularly invade termite mounds, and the reasons for doing so differ from animal to animal.

It may be difficult to picture, but several mammalian animals use termite mounds as a form of shelter. For example, many people may know that aardvarks prey upon termites, but few people know that aardvarks use termite mounds for shelter. Aardvarks often dig burrows beneath termite mounds in order to live amongst their termite prey; this burrowing activity allows aardvarks to avoid predatory attacks that go along with foraging. These aardvark holes are then sought out by warthogs looking to find shelter before the dark of night sets in. In these cases, warthogs continue to excavate the termite mounds in order to better accommodate their size. These mound-dwelling warthogs will then back into the hole beneath the mound in order to expose their tusks in preparation for a predatory attack.

Warthogs are relatively aggressive creatures, but that does not stop the occasional lion from dragging warthogs out from their remodeled termite mounds. In fact, lions are the only predators capable of aggressively removing warthogs from beneath termite mounds, indicating that mounds offer warthogs an effective form of protection from predators.  In addition to warthogs, dwarf mongoose colonies sleep and nurture their young within abandoned termite mounds due to the heat that they provide. Wild dogs and spotted hyenas also dwell within termite mounds after aardvarks burrow beneath them. Leopards and cheetahs use termite mounds in order to search the landscape for prey on the mound’s peak. Even humans are attempting to create eco-friendly buildings that are engineered to mimic a mound’s energy-free air conditioning system.

Have you ever heard of any insect species that dwell within termite mounds?